From French inauguration “installation, consecration,” and directly from Late Latin inaugurationem (nominative inauguratio) “consecration,” presumably originally “installment under good omens;” noun of action from past participle stem of inaugurare “take omens from the flight of birds; consecrate or install when omens are favorable,” from in- “on, in” (see in- (2)) + augurare “to act as an augur, predict” (see augur (n.)).

I am drinking Peace on Earth coffee and wearing ‘glittens’ as I write this blog. I am listening to the morning news on the radio.

Peace on Earth coffee is grown in Peru and Columbia and processed in Madison, WI. I know this because as a SERRV “customer care” representative, I was frequently asked questions about the growing and production of their coffee. http://www.serrv.org/product/organic-peace-on-earth/coffee-tea

To learn more about the role of coffee in my art process refer to https://thestonepath.wordpress.com/2015/06/08/ing-part-2/

The mission of SERRV International is to “promote the social and economic progress of people in developing regions of the world by marketing their products in a just and direct manner.” www.serrv.org

SERRV was started in 1949 by the Church of the Brethren – one of the traditional peace churches that include the Quakers and Mennonites. Peace churches are churches, groups or communities advocating pacifism or Biblical nonresistance. I first learned about the peace churches when creating Heifer Relief: Compass, Ark, Berth a multi media installation about the ‘seagoing cowboys’ of WW2. https://www.heifer.org/join-the-conversation/blog/2014/March/honoring-heifers-history.html

I wish that drinking coffee and wearing handmade gloves could pave the way to peace – between people, between communities, between countries….

But as the BBC radio program ends,  I realize the road to peace is still long.

Inauguration: the beginning or introduction of a system, policy, or period.

All we are saying…is give peace a chance.

The Beatles’ song quickly became the anthem of the anti Vietnam-war and counterculture movements. In November of 1969, a half a million demonstrators sang it in Washington, D.C. at the Vietnam Moratorium Day. I moved permanently to Washington in 1975 after graduating from Gallaudet University to become a teacher of the hearing impaired at Kendall Demonstration Elementary School.

In 1977, I attended President Jimmy Carter’s inauguration and  interpreted his speech for hearing impaired friends. http://www.presidency.ucsb.edu/ws/?pid=6575

His speech outlined a road map to healing – out cities, our country, our world –

“Within us, the people of the United States, there is evident a serious and purposeful rekindling of confidence. And I join in the hope that when my time as your President has ended, people might say this about our Nation:

–that we had remembered the words of Micah and renewed our search for humility, mercy, and justice;

–that we had torn down the barriers that separated those of different race and region and religion, and where there had been mistrust, built unity, with a respect for diversity;

–that we had found productive work for those able to perform it;

–that we had strengthened the American family, which is the basis of our society;

–that we had ensured respect for the law and equal treatment under the law, for the weak and the powerful, for the rich and the poor; and

–that we had enabled our people to be proud of their own Government once again.

I would hope that the nations of the world might say that we had built a lasting peace, based not on weapons of war but on international policies which reflect our own most precious values.

In 1978, the Camp David Accord resulted in a cessation of hostilities between Egypt and Israel. Anwar Sadat was named Man of the Year by Time Magazine. He and Menacham Begin shared the Nobel Peace prize.

In 1981 Anwar Sadat was assassinated. Since then, there have been other attempts at peace and other assassinations ending the progress. From 2003 – 2011, there have been 37 armed conflicts throughout the world – some still ongoing – most we know little about.

In A Land Twice Promised,  an Israeli woman and a Palestinian woman intentionally begin a dialogue to share their personal and political histories — one conversation at a time – over a long period of time. The author,  Noa Baum adheres to the belief expressed by the Quaker peace hero Gene Knudsen-Hoffman:

“an enemy is one whose story we have not heard.”

All we are saying… is give peace a chance.

The 1st Amendment guarantees the right to peacefully assemble.

Congress shall make no law respecting an establishment of religion, or prohibiting the free exercise thereof; or abridging the freedom of speech, or of the press; or the right of the people peaceably to assemble, and to petition the Government for a redress of grievances.

My first protest march was accompanying my mom at the Mothers March in Portland, Maine in the 1960’s. The local swimming beach had been closed due to sewage pollution. In a neighborhood populated by a large number of low-income school-aged children, there was no alternative. Parents were unable to afford private day or sleep away camps. Prospects for recreation during the summer were bleak.

The Mothers were victorious. The City of Portland not only constructed a pool but hired life guards – many from the Munjoy Hill neighborhood.

(Full disclosure: I taught swimming there for 4 years.)

As the seat of the federal government, Washington D.C. has “hosted “ protest marches since the inception of the country. https://en.wikipedia.org/wiki/List_of_protest_marches_on_Washington,_D.C.

In the book Democracy’s Big Day – Jim Bendar tells the story of the history of protests. In 1913, prior to Woodrow Wilson’s inauguration, 1000’s of women marched for the right to vote. http://wamu.org/story/17/01/09/trumps-inauguration-will-bring-protests-part-long-tradition/

Inauguration: a ceremony to mark the beginning of something.

I live in a town of 900+ people that is approximately 1 mile square. Unknown to most of the inhabitants, the street names reflect its settlement by the Quakers in the 1700s : Farquhar, Shepherd’s Mill, Quaker Hill. The Pipe Creek Friends Meeting opened its doors in 1771 and still welcomes those who “ Seek that of God in everyone.”

I became a member of Pipe Creek Friends Meeting in 2001 as we prepared to invade Afghanistan. I wanted some place in which to build community and continue my search for “a lasting peace” – though now it would be a more intimate quest through personal prayer and non violent action.

In 2006, the American Friends Service Committee created a traveling exhibit – Eyes Wide Open – intended to “present a visual reminder of the human cost of the Iraq War and provide a place for public mourning….’

The exhibit contains a pair of combat boots to represent every American soldier and marine that has died in the war, as well as a pile of shoes representing Iraqi civilians who have lost their lives during the invasion and occupation. At that time, the exhibit contained 504 pairs of boots. https://www.flickr.com/photos/124651729@N04/28789922374 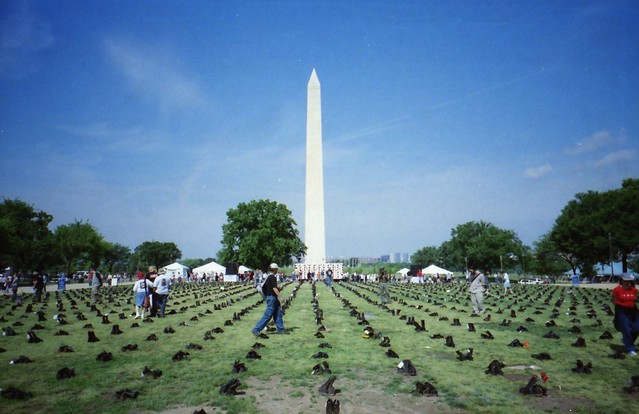 It was the day before Mother’s Day.

Bookended by the Capitol and the Washington Monument, we marched in silence. The only sounds were the steady rhythm of our feet like a steady heart beat, Shush shush, shush shush, on the pebbled path. We walked – a small group of protesters – and then gathered to listen as names of the most recent casualties were read aloud.

I had seen her earlier, affixing a red, white, and blue banner to a pair of highly polished boots. Tending this tiny shrine, she was adding a personal note and a photograph. I averted my eyes because it seemed to be such a private moment, although it was occurring in the midst of a public protest.

I didn’t know what to say.

What do you say to a mother who has lost her child to war?

Nothing. You just listen.

I kneeled next to her. We talked about her son, how she and her husband had become Gold Star parents against the war. We exchanged addresses. http://www.cbsnews.com/news/60-minutes-parents-of-fallen-heroes-unite-scott-pelley-2/

As a community-based artist, I attempt to create works that reflect individual feelings and ideas within a larger – often historic – context.

Not long after, I received a letter with a poem she had written – A Mother‘s Prayer. She hoped I could find a way to incorporate it into my artwork.

Inauguration: the formal admission of someone to office.

In classical Rome, augury sought the divine will regarding any proposed course of action which might affect Rome’s pax, fortuna and salus (peace, good fortune and well being).

INAUGURATIO was the ceremony by which the augurs endeavored to obtain the sanction of the gods.

The augur was a priest. His main role was interpreting the will of the gods by studying the flight of birds: whether they are flying in groups or alone, what noises they make as they fly, direction of flight and what kind of birds they are.

We cannot foresee the future. I could not have known that it would take 5 years to create a work of art that reflected the feelings of grief – in the nation, in the community, at a protest and in a mother that I witnessed on that day in 2006.

Sometimes it takes years for the disparate pieces of an idea to be woven into a fully realized work of art.

I dug the blood red clay at the Watershed Center for Ceramic Arts and it “marinated” in 5-gallon buckets for 10 years under a worktable in my studio.

I found the steel cage in a barn 7 years ago and stuck it in my garden where morning glories intertwined with it – making it invisible.

It was not until five years ago that the sound of mourning doves echoed my heartache about the continuing conflicts .

Doves, are used in a variety of settings as symbols of love, peace or as messengers. Doves appear in the symbolism of Judaism, Christianity and Paganism, and of both military and pacifist groups.

And so I started to make ocarinas shaped like doves.

Each clay dove fit into the space created by my hands in prayer. 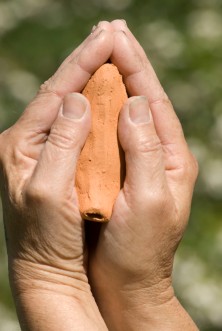 With the help of friends, I pit fired the 365 small birds.

The doves survived the flames.

The ashes became the nest.

The steel cage became the Dovecote.

Each dove is an ocarina that sounds like a mourning dove.

The effectiveness of augury could only be judged retrospectively. I cannot predict the future. I cannot know if a Presidential inauguration unifies a country or if protest marches change the course of history or if art contributes to lasting peace.

Still, I am preparing for another inauguration.

Still, I am preparing for another march.

Still, I am preparing for another exhibit.

Each time I install Dovecote: 365 Prayers for Peace, I pray as I place each dove in the cage.

I pray for peace in the cities;

I pray for peace in the country;

I pray for peace in the world.

I pray for ‘lasting peace.’

Welding Contractors llc built the base.

Women’s March Controversy: To wear or not to wear a “Pussy Cat” hat.

How do I pray for my son at war?

asking to not keep some other mother’s son safe?

I want you to end this war.

But, while he is there, please fill him with your holy spirit

and fill his buddies as well.

Guide them, give them the knowledge you wish for them.

Fill them with love and compassion

for those that they fight for,

and for those that they fight against.

Be with him when he takes the life of another, for we have taught him that life is sacred

Soothe his pain, his anger, his guilt

Most of all, God, don’t let him be afraid

Make your presence known to him.

Make the love of his family known to him

the near idolatry of his sisters,

the pride of his father,

and those undefinable emotions that stirred in me when I first felt him in my womb.

I am afraid, God,

This feeling is awful

“A Prayer to a Dying Son” was written by Lorene Davey for her son Seamus. KIA 21 October 2005.